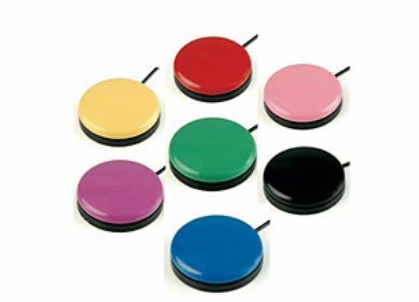 In the field of assistive technology (AT) we talk a lot about switches.  We usually bring one or two switches to our tabling and outreach events as some simple and portable examples of AT, since they are a popular item that we loan out for free for 30 days from our Device Lending Libraries.

However, what we didn’t realize when we decided to bring them to our table is what a conversation starter they would be!  People at our table always end up being drawn to them with their bright colors just begging to be pushed.  Without fail, pushing them they ask, “What do these do?”

Now, as you may already know, there are many different types of switches that can be used with various tablets, computers, AAC (Alternative & Augmentative Communication) devices, etc. But, when asked what a switch is, I think the best and easiest definition is to explain that it is like an accessible mouse that allows someone to access a system.  It can be pushed by a hand, a head, a foot, breath… the options are endless.  A switch is literally: a device for making and breaking the connection in an electric circuit – it could also be called a control, a lever, a button, etc.

So, that being said, it is an important part of AT that doesn’t get talked about a lot, so when i learned about the tecla interface system and saw this post on their Facebook page, I decided to share it through out blog, as it is important information to know about for anyone that uses any switches. Tecla allows an individual to interact with their iOS and Android devices or computers — hands-free. This includes the iPhone, iPad, iPod Touch, and Android smartphones and tablets. It works with all assistive switches on the market including buttons, sip-and-puff controllers, head arrays, joysticks and the driving controls of a wheelchair. Enjoy!

The following post was taken straight from Garry’s blog at:  http://thesurprisedpessimist.com/2016/03/13/the-best-hands-free-device-hands-down/  Check out his other posts as well! 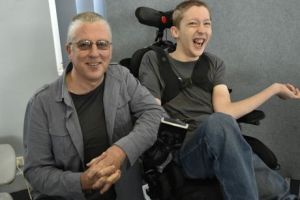 I am very grateful for the Tecla Shield because it is the only device I know of that gives him reliable, wireless access to his Mac and iPhone.

Think of the Tecla as a device that enables a person who has NO HANDS to access a Mac or iPhone and do exactly the same things that can be done by someone who does have use of their hands. A Tecla works like a touch-screen or a wireless keyboard – ever used a touch-screen device? brilliant! ever used a bluetooth keyboard? also brilliant! But what if you had no hands?

Think of tapping a switch like tapping your fingers on a computer keyboard or tapping on a touch-screen device (although, let’s be honest here – when I say ‘computer’, I mean ‘Mac’, and when I say ‘touch-screen device’, I mean ‘iPhone’ or ‘iPad’, because; frankly, PCs won’t talk very nicely to my son. But Macs do! Other phones won’t talk very helpfully to my son, but iPhones do!  Only Apple devices have this free in-built feature – it’s called Switch Control.)

With the little blue and orange box in his wheelchair backpack, my quadriplegic son is enabled, through Apple Switch Control, to make connections with the world…literally. Without the use of his hands, he nevertheless opens and closes doors,  edits video, turns on his office air-conditioner, chats to friends, makes phone calls, listens to music, completes university courses, runs his own business, etc, etc, etc.

The Tecla Shield – a cute little box with a funny name. Where would we be without it!

I made this short video to send to the guys at Komodo Open Labs in Canada as a user-testimonial for their magic little ‘Tecla Shield’ Bluetooth Switch Interface.