I remember many years ago seeing the first virtual reality headset at a mall that was a golf simulator.  And, although I didn’t have any desire to go virtual reality golfing or even real life golfing at that time in my life, I remember thinking, “Wow!  This is going to be the wave of the future!”.  Then I promptly forgot all about it and never really saw much about virtual reality again… until this year.

I have been noticing more and more at assistive technology (AT) events and conventions people demonstrating and talking about Virtual Reality systems.  I was intrigued and thought of it as a great educational tool but a little bit baffled at the real life implications for people with disabilities.  As soon as I started doing research about it though, I realized it would be useful and a tool for many different disabilities.  From helping to alleviate anxiety, fear, PTSD and other mental health disabilities to its physical practicalities, virtual reality (finally) is bringing the future here! 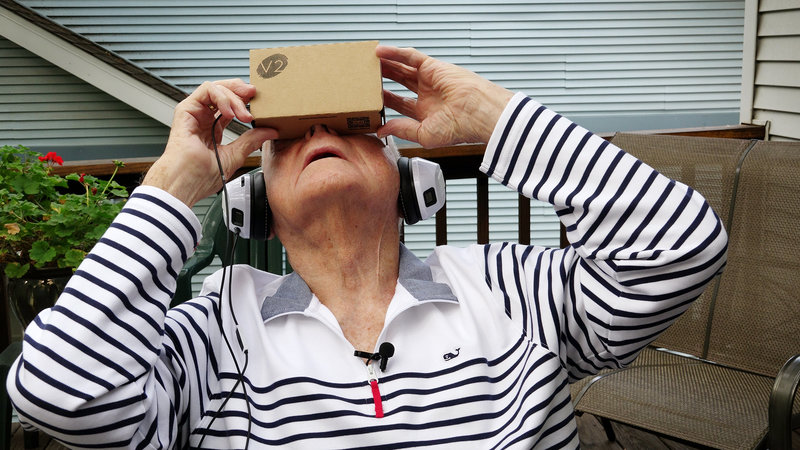 Virtual reality is catching on as a tool in medicine. The technology has been used to treat phobias, reduce pain and even help doctors perform surgery.

Now virtual reality is being tried as a way to help people with disabilities explore the world that might be difficult or impossible in real life. And it’s happening at a price that’s well within reach.

For $10 anyone can buy a cardboard headset, download a free iPhone app, slide in a phone and explore virtual worlds from a wheelchair, bed or couch.

A couple months ago, virtual reality company Specular Theory was hosting a table at Singularity University’s Future of Virtual Reality event, when Danny Kurtzman cruised by in his wheelchair.

In real life, Kurtzman, who has muscular dystrophy, catches waves with the help of a nonprofit organization that gets people with paralysis engaged in action sports. With the assistance of a 12-person team from Life Rolls On, Kurtzman can lie down on a board, get carried into the water and then move into the waves. 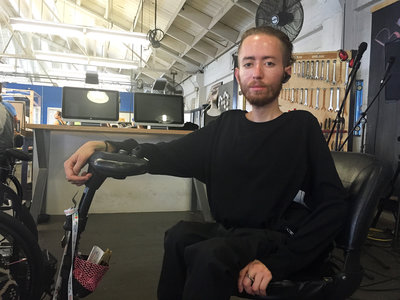 The day Kurtzman stopped at the Specular Theory table, he had no idea what he’d be watching. Then co-founder Ryan Pulliam handed him a virtual surfing experience.

“It was such a trip because I went surfing last week but I was lying down on the board,” Kurtzman says. “In the headset I could actually experience surfing standing up!”

The Newport Beach, Calif., native says he’d never had that sensation before.

“It gave me that awesome feeling — that butterfly happiness feeling,” he says. “It allowed me to experience something I thought I never could experience.”

Pulliam and her co-founder Morris May were mesmerized watching Kurtzman test out the demo.

“I’ll never forget looking at him. He was stoked,” Pulliam says. “He made us realize this goes beyond empathy — it’s a way to inspire people with disabilities and give them new experiences as if they are real. It’s this powerful, magical moment.”

Pulliam and her team created the virtual reality experience by using proprietary software to film professional surfers in California and Mexico. She says the video isn’t interactive. The user can’t move his or her body in real life and see it move in the headset.

“It’s a cinematic experience,” she says, “where you can look down at the board and feel like you’re barreling through a wave.”

In 2014, Facebook purchased VR company Oculus for $2 billion. Analysts predict the company will sell millions of units next year, when its Oculus Rift headset hits the market.

Google’s birthplace, Stanford University, launched a Virtual Human Interaction Lab in 2003 that is pioneering the development of new virtual worlds.

Jeremy Bailenson runs the lab and measures VR’s effect on its participants. He has even studied how being disabled in a virtual world affects able-bodied users.

He has also created a world where users have more limbs than they would in real life. They might have three arms and need to adapt to this new body.

Through VR’s sensory feedback, we can gain a new understanding of our bodies, Bailenson says. Through virtual experiences, we can even reshape our homunculus — a map of the body we have in the brain.

Since the lab started in 2003, its researchers have met with influential figures like Mark Zuckerberg and President Obama.

Attendees at the presidential event on the Stanford University campus say Obama even joked that Congress could benefit from the lab’s empathy work.

Honor Everywhere has created VR experiences for aging or terminally ill World War II veterans so they can virtually visit war memorials halfway across the country.

For younger Americans, the University of Georgia and the Georgia Institute of Technology developed a program called BreakThru to help students with disabilities pursue STEM careers. 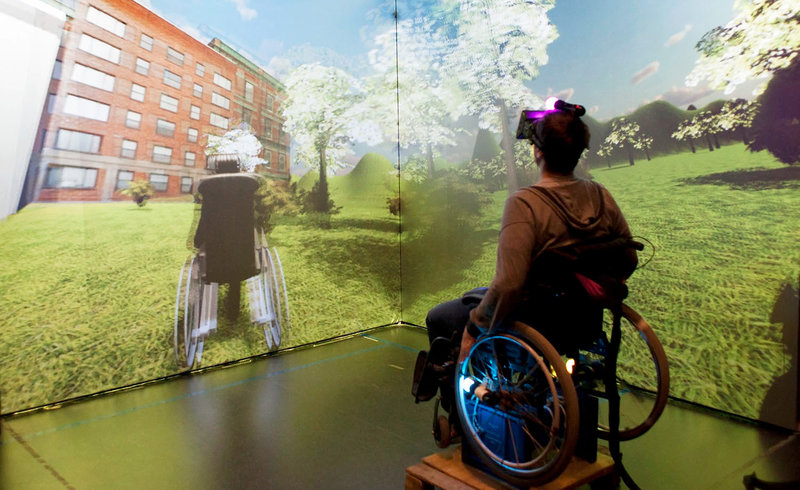 A student in a wheelchair tests out a virtual reality experience at Aalto University in Finland. Courtesy of Tuukka Takala and Liisa Hirvisalo

Through virtual reality, students solve complex problems in imagined worlds that may be applicable to their future careers. Funded by the National Science Foundation, the program has helped place 50 students in STEM careers.

Though virtual reality has been around for decades, the advancements we’re seeing now are momentous.

“It is a pivotal moment in virtual realty,” Bailenson says, “as VR migrates from the laboratory to living rooms across the world.”

The original version of this story first appeared on KQED’s Future of You blog, which explores the intersection of emerging technologies, medicine and health care. Lindsey Hoshaw is Twitter: @lindseyhoshaw