I had my first panic attack about a month ago, outside my doctor’s office. Stress from recent health crises and triggers from childhood trauma culminated in a very scary experience. My friend was able to talk me through breathing /stopping hyperventilating and came to get me and take me home.

I talked with my therapist about plans to prevent a future full-blown panic attack. She suggested noticing symptoms that came up as my anxiety increased. For me this is sweating, pounding heartbeat, and feeling trapped. Knowing this, she suggested using several interventions to prevent escalation and  breathing techniques to try to calm myself. This worked and helped for the next couple of days. 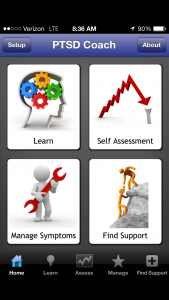 That is, until I was at an emergency preparedness conference and they were talking about critical incident stress management (CISM). I had recently run into a woman who I worked with when she/we were attacked and she was choked at our workplace. She could have been killed in the attack. After that incident, we had a critical incident debriefing. At the conference, the memories of that incident started to come flooding back, along with the feelings of guilt having recently run into my former colleague. Then, the conference presenter showed a video of workplace violence as an example—in a hospital setting (which was the setting of our attack). So, then I was done for. I hastily left the room and retreated to a quiet corner down a hallway.

I was breathing rapidly and tried to call a therapist friend immediately as my attempts at regulating my breathing were failing miserably. I got a voicemail. Not wanting to bother the friend that helped me last time, I decided I was going to try to go it alone until the therapist could call back.

I remembered that I had downloaded PTSD Coach, an app designed by the Veterans Administration, onto my iPhone and had been using it for anxiety and depression. The app has a tool for managing symptoms and one of the symptoms you can select is “Reminded of Trauma.” I selected that and rated my distress on a level from 1-10. I gave myself an 8 and the app suggested tools accordingly. It gave me the option of distracting and laughing/reading a comic book. I thought to myself ummm no, that isn’t going to work right now, so I gave that a thumbs down and asked for a new tool. 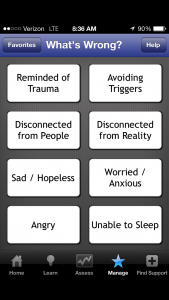 ch then suggested Deep Breathing—putting on headphones and being led through a breathing exercise. Nice idea, but I left my headphones at home and I was at the end of a hallway where people could possibly hear me. New tool please!

Then we started to get somewhere—the app suggested slowly counting to 100. Yes, that helped me calm down some. Progress! After that, I asked for yet another tool, and it guided me through the RID Tool. R= relax. The app suggested breathing in and out slowly. As you breathe in think “let,” and as you breathe out think “go.” A 30 second timer started counting down.  You can then add 30 more seconds or move on. I took another 30 seconds.  The I=identify the trigger. The app suggested going over the last few minutes and hours and identifying what reminders of your trauma you encountered. I easily listed these in the space provided.  It then said once the triggers are identified, it is important to notice how it is just a reminder, and not the actual trauma happening again. At first I thought, “Well, duh, I know that,” but telling myself that did actually help. Then I filled in the box about how this experience was different from the actual trauma. In D, you decide what to do now, the app said you can try to decrease the trigger’s power by deciding to stick around and see that you can handle it and that your stress will actually go down the longer you stick it out. It also suggested if you are angry or in danger of harming yourself or others, you should take a time out and seek support. I decided to sit outside the meeting room for a little longer in peace and rejoin the conference at the next break. I did attend a few more sessions then found myself completely exhausted and decided to leave the conference early. 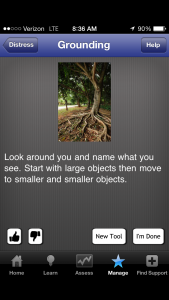 Exercise suggesting looking at objects around you and naming what you see starting with large objects and working to smaller ones.Meanwhile, I tried one more tool before going back to the conference. The app suggested a grounding exercise, “Walk slowly focusing your attention on what it feels like to take each step.” This was a great way to re-center and continue calming myself. I got outside for a walk and remembered that walking and being in nature always helps me. After my walk, the app asked me to again rate my distress level. I gave myself a 5. Much better than before.

***Note if you give yourself a 9 or 10 the app does suggest calling for help using people you have pre-loaded into the app and/or nationwide hotlines.

The app has dozens of exercises to choose from and eventually “learns” your favorites and suggests them more often. It really has helped me cope and manage my PTSD symptoms.

Have you tried PTSD Coach? Has it helped? Any other apps that help you?