Reprinted from the Assistive Technology Blog, by Venkat Rao 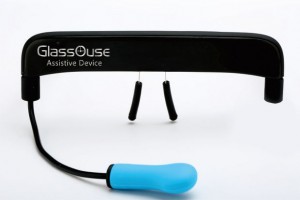 For amputees, people with spinal cord injuries, stroke patients, and other who have bad motor skills, a mouse for computers or their finger(s) for tablets or phones  are not the most feasible ways to operate their devices. GlassOuse, a new Bluetooth operated  eye and mouth controlled device, is meant for people who cannot use tracking devices in the traditional sense. The device is worn like eye glasses and has a “button” attached to it. Moving the head moves the mouse on the screen and also allows scrolling, and biting the attached (antibacterial) button performs clicks on the screen. It is an extremely light device and weighs only 50 grams (less than 2 ounces).

A GlassOuse can work with practically any device that has Windows, Mac, Linux or Android.

The inventor of GlassOuse, Mehmet Nemo Turker, is raising money through an Indiegogo campaign, and plans to deliver them by August 2016.  A GlassOuse would cost $149 through the campaign. He also plans to donate several of them to not for profit organizations.

Watch the video below to see GlassOuse in action.