I have just returned from a two week vacation in Taiwan (my place of birth); during which I visited three very different disability service institutions. I also had the pleasure of being briefed on about the state of Taiwanese disability services, and how much it has improved since I bid my farewell in 1989.

The first thing I noticed was that in most public men’s room, there was at least one urinal equipped with handrails. Taiwan, like Europe and Japan, is facing similar problem with aging population. I remember I had 45 classmate in first grade, today, the class size is down to 20. So it makes sense the infrastructure must make allowance for an aging population. 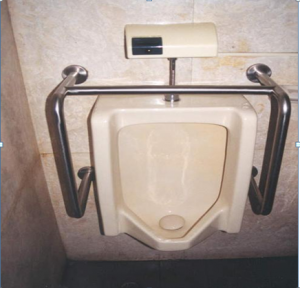 Beside urinals, there was also an alarm installed inside the bathroom stalls at the Taipei High Speed Rail Station, in case someone requires assistance. Also there are wheelchair stair glides installed at newer small shopping centers.

I found it very interesting how Taiwanese government approaches AT acquisition. Here in the United States, your AT largely depends on your Insurance coverage, the better your insurance, the better your AT would be and the less you pay. Because Taiwan has a single-payer National Insurance scheme that covers 99% of the population, the Medical Insurance Bureau under the ministry of health cannot also cover AT, instead, the AT was administered by the Ministry of Social Welfare, which then, fund Assistive Device Resource Centers throughout Taiwan. The main purpose of the ADRC is to evaluate the AT needs of the disabled person, and because of this, ADRCs are staffed with Occupational Therapists, Speech Therapists, and oddly enough, audiologists (for hearing aids).  Upon receiving the reports from the ADRCs, the Ministry of Social Welfare would then, reimburse the device up to the different maximum amount allowable in accordance to a published schedule, every 2 years. The percentage of reimbursement is income based.

For example, let’s say a brand new power wheelchair costs $3000.00, and the scheduled maximum reimbursement allowable is $2000.00, the most government will reimburse you for the $3000.00 is $2000.00, but wait, most people don’t get the full maximum allowable, only the low income households get that, which means the government would fund one-third of a chair every two years for most people, whose household income is more than $700 a month.

It’s an interesting system, one that very different from what we have in the United States. They can certainly do better, so can we, hopefully someday I’ll get a chance to visit other advanced countries and examine different approaches to public AT funding.