Wheelchair or Quad Rugby, formerly known as “Murderball”, is a fast-paced, hard-hitting, and very addictive game. In order to participate, players are required to have some impairment in all four of their limbs. In the past only quadriplegics played this game, but recently faster and more agile quad–amputees are allowed to participate as well. It is played on an indoor basketball court with a goal at either end. Each team has four players on the court, and each player is ranked a value between 0-3.5 points. The team can only have eight points on the court at one time, so there are lots of different lineups the team may be able to choose from depending on who is on the team.  The objective is to get the ball into the opposing team’s goal in less than 40 seconds. You have to get across half-court in 12 seconds and you also need to bounce the ball or pass it every 10 seconds in order to avoid a turnover. If a turnover is forced, then your team must quickly transition from offense to defense. 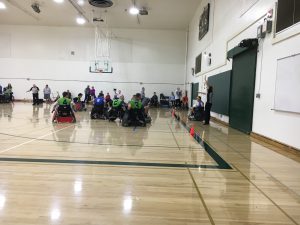 Camaraderie grows between players because you need to work as a team in order to effectively score and defend your own goal. You need to know the strength and weaknesses of yourself and of the other players on your team in order to ensure your success against the opposing team. This isn’t an individual sport; you win and lose together as a team, and therefore you grow closer to your teammates which helps you become better as a whole.

It’s probably the most fun you can have in a wheelchair! These chairs are very agile, fast-moving, and hard to tip over; they are like armored little chariots. You don’t realize how hard you are working on the court because you’re having so much fun. It’s only at the end of a quarter or a break when you realize that you’re out of breath, and you can definitely feel it the next day.

Although wheelchair rugby is a full contact sport, you cannot make contact with another player, but you are allowed to hit their wheelchair as hard as you like. I once watched a teammate get hit so hard that he and his wheelchair flew across the goal line which caused a penalty goal for the opposite team. But it is still relatively safe because the players are strapped in to their chairs with ratchet straps, Velcro, and seatbelts. Most times when players collide hard somebody ends up on the floor. When this happens, assistance will come out and upright the player, then the game goes on! 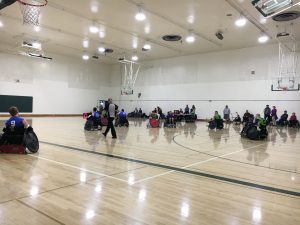 A typical wheelchair rugby practice will start with some warm-ups that lead to some situational play, followed by a scrimmage. Most teams practice 2 to 3 times a week, for a couple hours on weeknights and around five hours on weekends. It is a big commitment for the players because of all these practices, but in order to play together as a team you must practice together as a team. There is also travel required for the players and the team to be able to compete.

The United States is broken up into conferences so you must win your conference before you can play at the nationals. The USQRA or United States Quad Rugby Association is who sanctions these events. If you are a good team and win the nationals you have a good chance to be selected to try out for the US team that plays internationally and at the Olympics.  These players are considered the best of all the teams in the nation.

There are two local teams near me, one in the Bay Area called The Quake, and one in Sacramento known as The Storm. Although we are rival teams, we are all friends off the court.  There is always room on the teams for new players, wouldn’t you want to play?