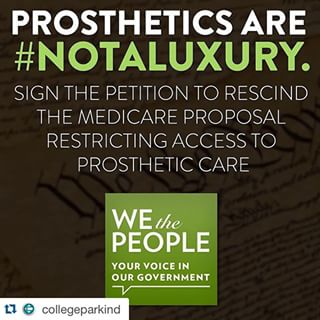 The Amputee Coalition, along with many others in the prosthetic limb communities, are asking for help in raising awareness of a recent Medicare policy proposal released on July 16 that has the potential to drastically change prosthetic care for individuals with amputations. Keep in mind that even if you’re not currently a Medicare patient, private insurers often follow Medicare guidelines, so this issue could still impact you.

You may or may not have heard about the details of the Draft Policy for Medicare’s Local Coverage Determination (LCD) Article on Lower Limb Prostheses. As the only national amputee consumer advocacy organization, the Amputee Coalition is voicing their concerns about the potential impact these proposed changes could have on individuals that use prosthetics, and is providing formal comments that include recommended changes to the proposed policy to ensure patients continue to receive what they feel is appropriate prosthetic care.

The Amputee Coalition provides the following highlights (below) of some of the most significant concerns that they have found with this proposed policy. More detailed information about each concern is available at http://www.amputee-coalition.org.

There are several ways that you can help!

Record a 10- to 15-second video of yourself doing an everyday activity; attach that video to a tweet. Pick a basic activity that you do every day (e.g., carrying your child, walking your dog, buying groceries, etc.).
End the clip by saying, “[insert activity] is not a luxury.” So, for example, if you shot video of you walking the dog, you’d walk toward the camera and then stop and say, “Walking my dog is not a luxury.”
Start the tweet with “@CMSGov.” ( the Twitter handle for Medicare), so that Medicare sees each and every video.  Feel free to also tag @AmputeeUSA so that they can re-tweet your message!
After that, type “[insert activity] is ‪#NotALuxury.” So again, using the previous example, the tweet would read, “Walking my dog is #NotALuxury.”

Finish by linking to the petition and asking Medicare to rescind this proposed policy. Below are two video examples:

@CMSGov “Grocery shopping is not a luxury” Ask Medicare to rescind this proposal policy: http://t.co/a8qPq2vYOZ pic.twitter.com/nq5Mvi9omF