Do you ever listen to Science Fridays on NPR?

This great radio show broadcasts on many public radio stations on Fridays from 11am – 1pm (PST).  If you can’t listen to it live, you can also stream it from their website when it is convenient for you.

This segment starts out by acknowledging the 25th anniversary of the Americans with Disabilities Act (ADA) and its importance in the the lives of people with disabilities.  This year on July 25th, 2015,  Apple’s CEO Tim Cook tweeted, “Accessibility rights are human rights. Celebrating 25 yrs of the ADA, we’re humbled to improve lives with our products. #ADA25, ” thus recognizing the importance of  technology and apps in positively changing the daily lives of people with disabilities.

Furthermore, they interview several different people in the field, including an IOS accessibility expert, who has a disability himself, Steven Aquino. Steven  discusses and explains a few different apps that he has worked on. He also mentions the importance of people with disabilities themselves being included the design of apps.

The podcast then goes on to highlight this year’s Ability Challenge. Launched  to commemorate the 25th anniversary of the ADA, AT&T and the Ability Lab at New York University partnered for the Connect Ability Challenge, a competition that called on software developers to create apps and devices to “improve the lives of people living with disabilities.” 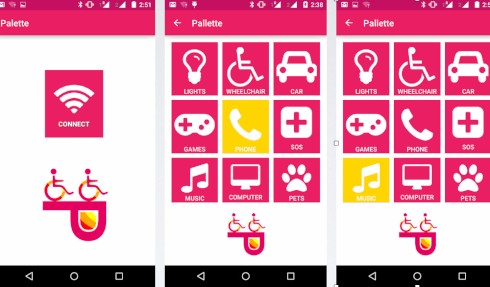 A screenshot of the Pallette app, which interfaces with a “tongue-controlled wireless device that fits in the mouth of the user.” It was one of the submissions to the 2015 AT&T NYU Connect Ability Challenge. Image by Pallete Team: Shawn Bramson, Daniel Levine, Rohit Jain, and Oliver Hoffman

Do you use an app that has changed your life for the better?  Share it with us in the comment box below!