When I think of what life might be like without access to Durable Medical Equipment (DME), it makes me think of living in earlier times.  Not too long ago many of us would have been forced to live in institutions where we would most likely not have access to DME that met our specific needs. 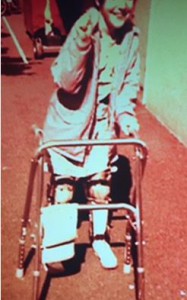 When I was a child, my father, John, wrote continuously to our family insurance company to get them to cover medical expenses in spite of my pre-existing conditions.  We were a family of five, including myself with a disability, and meeting all of our needs was a challenge.  Since we were a large family with two family run businesses and limited access to other income, having medical coverage was vitally important for us.

Somehow, my father still made it work, granted my DME needs weren’t as profound then as they are now.  Our medical coverage helped to pay for my walkers, crutches, and wheelchairs, so not having it would have been really hard on our family.

A few years later, my mother, Diane, worked for the Santa Clara County Office of Education. She started as a teacher of Special Education (yah, the irony), and later worked as a Resource Specialist.  By this time, the dreaded insurance company was a distant memory and we were now covered under a Health Maintenance Organization (HMO).  At this point, insurance companies were being asked to cover more people with pre-existing conditions. Before more mandates were in place to provide coverage despite pre-existing conditions, insurance companies considered and re-considered what they would and would not cover. 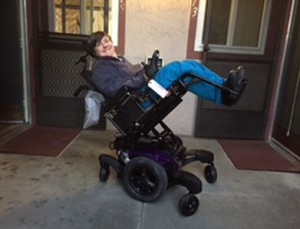 Christine using the reclining feature on her power chair

Fast-forward to today, where, at 51, I’m living on my own.  I am employed full-time and my medical coverage helps me to pay for what I would never be able to financially cover on my own- power wheelchairs aren’t cheap!

The power wheelchair I sit in now surpasses what I had as my first chair. Even with my medical coverage, I still had to take a gracious advance from my mother from a portion of her estate to afford my wheelchair.  The next chair is all on me.  I can only hope that the insurance coverage I have at that time will cover what I need in the future.  If it doesn’t, I might very well be revisiting my life from when I was a small girl, crawling on the floor- luckily I won’t be drooling then…or will I?!