The following excerpt was adapted from FWD/Forward (Feminists with Disabilities) For a Way Forward:
( http://disabledfeminists.com/2010/03/31/happy-cesar-chavez-day/ ) 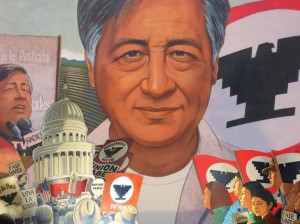 In California, Cesar Chavez day is an official holiday to celebrate the life and work of Cesar Chavez. Chavez worked to promote and enforce the civil rights of farm workers and, with Dolores Huerta, was co-founder of the United Farm Workers of America. While his work is usually viewed through the lens of organizing for Latinos, there is a significant disability component to his work.
Migrant farm workers are affected by a number of intersecting a complex factors which negatively affect their health and put them at risk of becoming permanently disabled through their work. They are likely to be exposed to harmful chemicals or dangerous work situations and because they often live on the farm under the control of the farm owner, they have little access to health care. Here’s a brief overview of the occupational hazards from the National Center for Farmworker Health:

The agriculture industry is one of the most dangerous occupations in the United States. While farmworkers face workplace hazards similar to those found in other industrial settings, such as working with heavy machinery and hard physical labor, they also face unique occupational hazards including pesticide exposure, skin disorders, infectious diseases, lung problems, hearing and vision disorders, and strained muscles and bones. Lack of access to quality medical care makes these risks even greater for the three million migrant and seasonal farmworkers.

In 2007, for every 100,000 agricultural workers in the U.S. there were 25.7 occupational deaths in agriculture. This compares to an average rate of 3.7 deaths for every 100,000 workers in all other industries during this same year. The Centers for Disease Control and Prevention label agriculture the most dangerous industry for young workers in the United States, accounting for 42 percent of all work-related fatalities of young workers between 1992 and 2000. Fifty percent of these victims were younger than 15 years old. 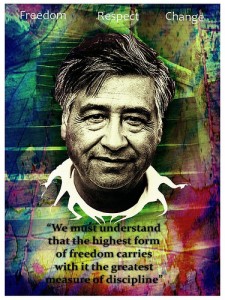 There are millions of workers currently in the fields, including a significant number of children, for whom this is the expected outcome – if they manage to sustain their labor for thirty five years. Cesar Chavez fought for those people and fought to protect them from outcomes and conditions that were, in his time, even worse and more damaging than what I’ve described above. We now must continue his fight.
Si Se Puede!

Do you work on a farm or do you work with farmers? Have you heard about the California AgrAbility Project?
The California AgrAbility Program’s mission is to promote independence in farming and rural living for people with severe injuries, disabilities and illnesses. To accomplish this, CalAgrAbility (the University of California Cooperative Extension Service) at the University of California-Davis, partners with the Greater Sacramento and Central Valley and Southern Chapters of the California Arthritis Foundation, a private non-profit disability service organization.
CalAgrAbility provides bilingual (English and Spanish) education, assistance and support to farmers, ranchers, workers and their families who have an injury, disability, or illness that limits their ability to perform farm tasks. Even though funds cannot be given directly to agricultural families, they can help find solutions to challenges. Staff helps locate resources including low-cost modifications to the farm, home, equipment and work site operations. Other resources include: assistive technologies research, health care and rehabilitation services, and advocacy with government and non-profit agencies for farmers and workers.
CalAgrAbility provides bilingual information and referral, technical assistance, education, and training to individuals with varying degrees of injury/disability. They also conduct bilingual workshops and seminars to other professionals about  farmers and workers.
Here are some handy tip sheets for farmworkers in Spanish and English by CalAgribility:

ERGONOMICS
Hands are a vital part of our day-to-day activities. Learn simple tips on how to prevent injuries to hands while working around the farm.

ASSISTIVE TECHNOLOGY
CalAgrAbility’s motto is “keep it simple”. Find out how simple assistive technology around the farm can help you get the job done safely.

For more information on CalAgrability and their services and programs, please visit their website.