Do you suffer from aphasia or know someone who does?

Lingraphica’s communication devices are designed specifically for adults with speech and language disorders. Lingraphica provides clinically relevant tools and services to help individuals with language and cognitive disorders connect with family, friends, and communities. Working in partnership with clinicians and caregivers, Lingraphica’s mission is to meet those individuals wherever they may be in their journey to improve or regain their communication skills. To learn more about Lingraphica, please visit http://www.aphasia.com/. More Lingraphica success stories is available via eBook (Download the eBook here). 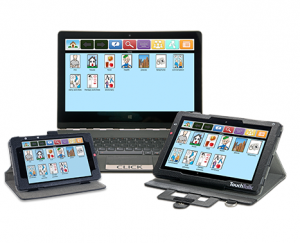 MEET GLORIA – A caregiver for her sister with aphasia
Cause of Loved One’s Aphasia: Stroke

Gloria became a full-time caregiver three years ago. Gloria’s sister, 63-year-old Sally, had her fourth stroke in October 2013. As a result of the stroke, she became partially paralyzed in her right arm and could no longer speak. Sally was so frustrated, having been employed as a General Manager and President of a transport company for 37 years.

“Sally had to be helped with everything. She became like my child,” said Gloria. “We had to start from scratch to learn things so she could get by. She would always point to her head and shake her head ‘NO,’ like saying it was gone.”

This was a challenging time for Sally, Gloria, and their family. Everyone treated Sally differently and trusted Gloria to take the lead on Sally’s care. While Sally recognized everyone in the family, she would forget her friends. Because of this, Sally stopped wanting to go to functions or spiritual congregation meetings anymore.

After Sally’s fourth stroke, flash cards no longer worked for communicating with others. Gloria started looking to other resources.

“We started writing things down using very short sentences or single words. Going to speech therapy was the key at that point,” said Gloria. “Sitting in on each lesson gave me something to work on with her each day.”

“Trusting her therapist and letting her take the lead in Sally’s problems helped us to become more positive and hopeful that Sally would be able to do more in her life,” said Gloria.

Now Sally has a TouchTalk device. Gloria reports that she is smiling and laughing again – especially when she is doing the activities on the device and learning.

“I am happy that Sally has the opportunity to use technology again in her life. I see that she can continue to keep improving…and get to a level where she will be satisfied with her life again,” said Gloria.

Also, the family is more engaging with Sally now. Gloria notes that Sally brings her ‘computer’ out and shows it to the family.

“I really feel that using the device has helped both of us so very much. We thank Lingraphica so much for being able to have something that gives Sally a better quality of life,” said Gloria.

1. Never lose hope – No matter how frustrating and difficult it is, never give up. Work on compassion and patience and try putting yourself in their shoes.
2. Use the tools that the speech therapist provides – Use the TouchTalk or whatever device is recommended – they work. They give confidence and some independence back to those that have lost everything.
3. Do research – Find out all about aphasia and apraxia or whatever impairment your loved one has. Ask questions and take notes.
4. Keep talking to and treating your loved one as normally as possible – Do not act like they have a problem. It is difficult enough for them that they know something is wrong. Make them feel normal. Make them laugh. Give them a hug and tell them that you love them.

In collaboration with Southern California Resource Services for Independent Living (SCRS-IL) and Lingraphica, the Ability Tools Southern California will have an in-person training on Lingraphica’s AAC Devices, Tools and Apps for Individuals with Aphasia and Other Speech/Language Disabilities on Thursday, September 29th in Downey, CA. For registration details, please visit Ability Tools’ Training Registration Web Page at http://abilitytools.org/training/training-registration.php.