This article explains some common apps used by a variety of people with different disabilities.  I have highlighted just four popular apps for your I-devices to help make every day life a little bit easier.

There are literally thousands of applications (apps) that are available on the iPhone and iPad App Store, some of them are well known and on almost everyone’s phones and tablets.  Some, however, are generally unknown  to the public but very useful for a variety of people for many different reasons.  I am going to be covering some very useful apps that may end up becoming instant favorites! 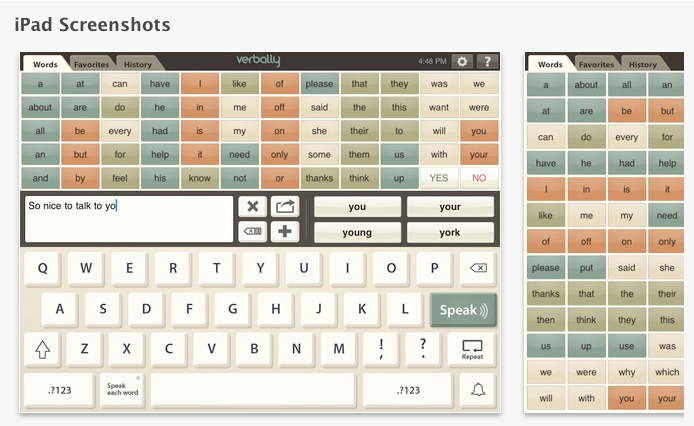 The first application that I wanted to cover is called “Verbally”. It is an app built for allowing quick and effective communication using your iPad via text to speech. It provides the feature of a keyboard so that way you can type out your conversation into the text box and have your iPad speak out loud whatever you have in your text box.

Want to speed things up though? Verbally also allows you to use a word grid which provides you with over 50 of the most commonly spoken words, which helps save time on typing certain words out. Want to go even faster?! Switch the word grid to the phrases grid and it will give you access to at least a dozen common phrases, making conversation smooth, easy and fast! To help with even speedier conversation is predictive text where Verbally will predict the most likely next word that you were going to type.

This second application, the SoundAMP R, works on your iPad, iPhone and iPod Touch by turning them into high-quality hearing options that lets users amplify the volume of sounds around them!  Whether you are out and about, at home having dinner, or watching television, SoundAMP R, can improve your ability to hear the sounds around you.

It provides a built-in microphone that sends an amplified signal in real time to the listener’s ear buds for improved sound quality. It has easy-to-use controls where you can slide the volume button or move the zoom slider to adjust the volume and background sound levels. And, if you do happen to miss something, there is an instant replay button so you can listen to the last 30 seconds of a conversation.

Are you a student that needs assistance during a class to keep up with the lecture notes? This is a great option to help with getting all of the teachers’ presentations, as it also has a recording feature so that you can capture all important lectures or conversations. Finally, it allows you to do many things at once with an awesome multitasking feature that allows you to check emails and browse the web while you listen.

Another very useful app for the iPad comes in the form of this GPS app called Ariadne GPS. It allows you to know your current location at any time and also gives you the option to have the application let you know what changes around you while you are walking  – such as street numbers, street names, construction projects, traffic, etc. It also gives you the option to save your favorite locations so when you are either walking, on the bus or using any transportation, it will alert you that you are near that favorite location, just in case you want to stop in for a visit.

Another really cool feature to the app though is the ability to use VoiceOver on the app to let you know of a certain area, sort of like a map. It also allows you to move along the map with your finger and as you move your finger it will announce the street names and numbers. Lastly, if you are in school and are attending a rather large college or university, you can program your app to include your classroom locations so that way it can help you navigate  throughout the school campus – making getting from class to class a little easier.

Yet another application that can be very handy is called Dragon Dictation. It is a great hands-free app that turns speech into text using either your iPhone or iPad. It can allow you to respond to text messages just by speaking to your phone or tablet and can even let you navigate social media. Want to update your status on Facebook or Twitter? This app allows you to do so just by speaking into it and it automatically updates. Not only does it handle social media but it can also send text messages as well as sending voice-to-text transcripts as emails.

Dragon Dictation is very versatile and works in a variety of areas in life – whether it’s for school, work, home – or just for being out and about – making it one of the most popular apps out there.

What other apps have you used  that have made your life easier?  Share them with us and our readers in the comment section below!