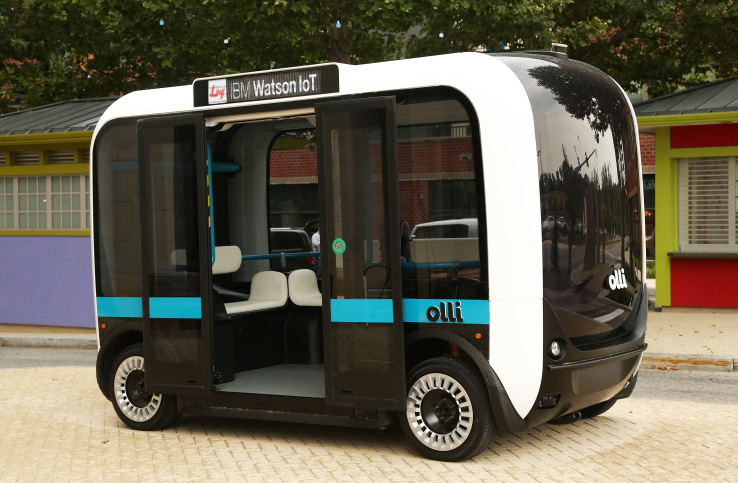 A new self driving bus, named Olli, is in the works that does a lot more than taking people places.

An accessible version of the bus, called “Accessible Olli” will be using IBM’s artificial intelligence powered Watson technology to communicate with passengers since there will be no driver or staff on it. For example, when blind commuters take public transit, they usually have difficulty finding empty seats.Olli, using cameras and artificial intelligence, would be able to identify open seats on the bus, and through audio cues and mobile app, would be able to direct the passenger. A set of haptic sensors placed on each seat would also be able to generate vibrations in the air using ultrasound, and would notify the passenger about an empty seat if they happen to pass one.

For deaf people, it is expected that the bus would use augmented reality and machine vision to read and speak sign language. Olli, with the possible use of augmented reality, may also be able to generate a hologram of a person signing to the passenger.

Olli would also have the ability to recognize people in wheelchair waiting at the bus stop, which would automatically activate the ramp to help them get on the bus. The 3D printed, self driving, self sufficient bus could also possibly alert passengers if they left their belongings under the seat.

These are all definite improvements and additions to a regular bus which normally just provides ramps for wheelchair users, bus route updates through audio, and sometimes the announcements of arriving buses at bus stations through beacon technology, if that transit system has implemented any or all of these features. According to the source article, Local Motors and IBM, the manufacturers of this bus, expect cities to buy them at a cost of $250,000 with monthly leasing options available as well. The source article suggests that production may begin this summer, however, IBM’s latest blog post seems to indicate that Olli is still a “lab”, and they are continuing to build out solutions by integrating newer technologies.

Watch the video below to learn more about Olli.

republished blog: OLLI IS A SELF DRIVING BUS THAT SPEAKS SIGN LANGUAGE & PROVIDES OTHER ACCOMMODATIONS