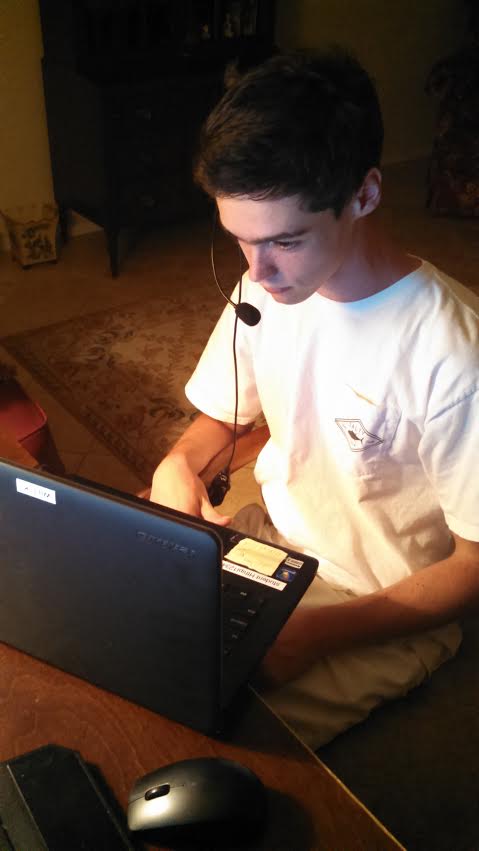 William Kellogg, using the Dragon software on a laptop computer

We saw the value in giving them the tools to succeed, and they didn’t even identify as disabled.

It is for this reason I struggle to understand why there is often resistance to AT, and why I work continuously to help mainstream AT whenever I get the chance.

I started using Dragon in 4th grade. It was just like the title – an untamed beast. It was not the voice-to-text program we have now, and I was constantly frustrated with it, as it mangled my words so badly I could barely recognize my own thoughts on the screen. I continued to work with it though because I could still get more thoughts out of my head and onto the screen faster than I could if I were simply trying to write. It wasn’t great, but it was better than nothing.

Technology as a whole is rapidly advancing, and AT is part of that. Advances in Dragon and Kurzweil and Google Read&Write have been astronomical. We have integrated computers and phones into our everyday lives because it helps us accomplish more with greater efficiency. Imagine what we could do if we incorporated AT into the mainstream community. AT isn’t just for those with disabilities; AT is for everybody. If it can provide an edge, an opportunity, why not incorporate AT? It’s about maximizing potential and using it to our advantage. AT can open the door to opportunities that would not otherwise exist.

It only seems rational that people would try to seek to capitalize on possible AT benefits, but there is often a resistance to AT. I understand it to a degree; I think often we as humans struggle with accepting things that are new or diverge from what is commonplace, but I also think that’s the kind of thinking that hinders us – that keeps us from getting to the moon and putting the world in our pockets.

It isn’t to say that I don’t think people shouldn’t be scared, because even though I know how much I benefit from AT, I am still afraid that others will look at me and automatically assume that I have cognitive deficiencies, especially because I look just like everyone else from the outside. For example, my teachers don’t see a physical disability and therefore I get pushback on using my AT to help me take notes or write papers or listen to books. They don’t understand that AT helps me succeed in being a better student because I can spend my time absorbing a lecture and using my phone to record for later reference rather than spend my time focusing on gripping a pencil and trying to take notes fast enough. We live in an age where efficiency is everything, and it’s already been proven that humans speak faster than they can write or type. So why not embrace and then harness the technology that allows us to get more onto a page utilizing a computer program than we can with a pencil.  It is for this reason I make as much of an effort to communicate with my teachers and speak at conferences that teach others the versatility of AT applications for everyone.

A closed mind hinders because it sets you up for not succeeding to your fullest potential. Imagine if our ancestors had not ever accepted that ink on parchment was much more efficient than a chisel on stone. That is why we should be tolerant of continued technological evolvement as AT tools have their merits that can benefit everyone. What other technologies are in the realm of AT that often only disabled individuals benefit from that should be at the forefront of everyday productivity?