AAC technology changes fast. Medicare policy? Not so much.

2014 has been a critical year for how Medicare handles its coverage of SGDs, and the result has been significant impact on individuals with complex communication needs. Currently the Centers for Medicare and Medicaid Services (CMS) is taking comments on a National Coverage Determination (NCD) for SGDs and so the situation remains dynamic. Below is an explanation of the issues and the history that has led to this policy moment. CMS needs to hear from as many knowledgeable people as possible before December 6th about their experiences and the SGD functions that individuals need.

SGD stands for “Speech-Generating Device.” SGDs output audible speech for use by individuals who cannot speak with their voices or whose vocal speech is difficult to understand. The earliest voice output technologies were either specially engineered devices or computers or PDAs (personal digital assistants) with specialized software. Today most SGDs are portable devices, many make use of tablet computers or smart phone technologies.

Prior to 2001, SGDs were considered “convenience items” by Medicare and not covered. As a result of concerted advocacy efforts and the education of health policymakers in the Centers for Medicare and Medicaid Services (CMS), in 2001 Medicare issued a National Coverage Determination (NCD) in which it agreed to cover medically necessary “speech-generating devices” as durable medical equipment (DME)– that is, medically necessary items that are “medical in nature.” Required elements in the assessment process to satisfy the medical need for the device were also agreed upon (see www.rerc-aac.com). 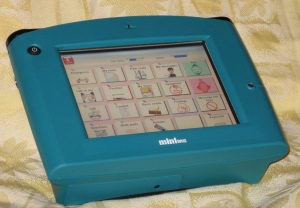 This policy meant that Medicare would NOT pay for devices that were useful to those without disabilities. If beneficiaries needed specialized software that ran on a typical computer, Medicare would pay for the software but not the computer.

Consequently, manufacturers that built their devices on computer components “locked down” the generic functions (such as Internet access) to satisfy the DME requirement. Medicare beneficiaries, however, had the option to pay out of pocket to “unlock” the hardware at their own expense, once they owned the equipment (and access additional features). That practice remained unchallenged until recently.

Tablets and smartphones have emerged as the latest technology for augmentative and alternative communication (AAC). While tablets are rarely covered by public insurance or private insurance, SGD companies have expanded the functionality of their products to compete with the communication capacities of these less expensive (mass produced) devices and to keep up with new opportunities made available by the Internet and social media for communication. “Locked” versions have continued to be available for Medicare funding purposes.

Last February, however, regional Medicare Administrative Contractors (MACs) issued a “coverage reminder” to “clarify” the 2001 NCD, stating it would not cover SGDs if they have even the capacity to be “unlocked.”  SGDs purchased by Medicare must not be upgradable by anyone, at any time in the life of the product, and manufacturers were told they would need to submit their devices for recertification/reclassification as SGDs. This policy blindsided the AAC tech community, AAC users, and those who provide AAC services.

In addition, effective April 1, 2014, CMS announced SGDs as available for coverage only through “capped rental.” This was reported as an adjustment to align SGD coverage with existing policy for certain durable medical equipment. Rather than providing for ownership from the point of delivery, capped rental delays a beneficiary’s ownership of DME for 13 months, and requires a monthly justification of need and eligibility for SGDs (until the rental period concludes and ownership is transferred). This is a significant administrative burden for vendors and consumers alike. In addition, capped rental denies DME to beneficiaries living in nursing facilities or receiving hospice services for 60 days or longer (Medicare’s “place of service” limitation). For individuals who begin their 13 month rental period at home and then move to a nursing facility or begin hospice services, the risk is alarming. They can lose the highly-customized SGDs they rely on to communicate with caregivers, medical personnel, and family at a critical juncture in their health status. Read “FAQs for Clinicians re: CMS capped rentals in the United States“

September’s Letter from Congress to Medicare

Advocates grew frustrated. CMS’s failure to adequately respond to inquiries about the rationale for the policy changes stoked their efforts to educate Congress on the devastating impact and see if CMS would provide answers to lawmakers. On September 11th, 27 senators and 173 representatives signed on to a bipartisan letter to CMS detailing concerns over these policy changes. The letter additionally questions the recent denials of “eye tracking” technology for individuals who need it as their only means of accessing an SGD.

The letter observes that the Social Security Act allows for creating a process for patients to upgrade their Medicare-covered DME at their own expense. It questions the coverage of SGDs under capped rental when the Social Security Act allows for the purchase of items that are “uniquely constructed or substantially modified to meet the specific needs of an individual patient” (as SGDs routinely are). It also asks for the reporting of anticipated savings based on these coverage denials and an assessment of the impact of Medicare’s SGD policy changes on individuals.  [Read the September 11th, 2014 Letter from Congress.]

In response to a myriad of advocacy efforts that brought pressure on the agency, on November 6th, CMS issued a statement rescinding the February “clarification” and opened a benefit category determination process and 30-day comment period on SGDs. Disability advocates were initially encouraged. CMS appears to be reconsidering what constitutes a SGD:

Medicare has also directed its payment contractors to revert to their pre-February 2014 treatment of SGD claims during this period. Advocates believe this action reverses–at least for the time being–the policy of refusing to cover SGDs that may be “unlocked.”

While seemingly positive, however, this reversal does NOT take action on capped rental. If capped rental remains in place, Medicare beneficiaries will not own their SGDs for a minimum of 13 months and will, therefore, not have the option to unlock these devices for 13 months. Individuals in facilities or receiving hospice care beyond 59 days will continue to be denied coverage, and those who need eye-tracking to access an SGD have no assurance of coverage (eye tracking denials have been overturned on appeal, but CMS has not clarified its policy to its Medicare contractors).

In effect, the November 6th announcement does not provide changes that offer immediate relief for those who need SGDs for communication. It remains to be seen whether the recognition of the importance of full access to communication methods inclusive of Internet access will promote Medicare coverage of SGDs, or will further confound the “DME” status of these devices.