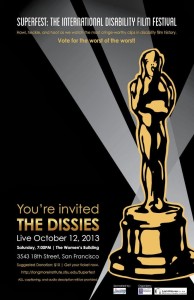 What are you doing Saturday evening, October 12, 2013?
If you are near San Fransisco, why not check out “The Dissies“?
Superfest, the longest running disability film festival, is back!
This year’s Superfest event is brought to you by the Paul K. Longmore Institute on Disability at San Fransisco State University and the San Fransisco Lighthouse for the Blind.
Superfest will take a look at the worst of the worst in recent film representation of disability and will be awarding these films nominations and awards based on different categories  such as ‘The Worst Disabled Villain,’ and ‘The Most Amazing Miracle,’ among others.
Superfest is about fun and laughter, but also encourages people to discuss and analyze the representations of disability and AT in films and media.  Disability communities nominated the films in which the worst negative portrayals of disability most affected them, and the Dissies, modeled after the Razzies, is about recognizing and reclaiming the negative representations and stereotypes that continue to permeate  mainstream culture.
Join us for this fun and educational event!
For more information on the event, click here: http://longmoreinstitute.sfsu.edu/Superfest
Have you seen a negative portrayal of AT and/or disability in a recent film?  Tell us about it by typing in our comment box below.